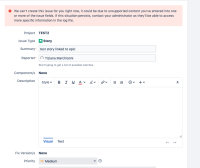 From : The issue is not created because the user does not have the appropriate permission. See  for a related suggestion.

Jira Software considers linking issues to epics as editing the scope of work of an epic, which is why it uses the "Edit issue" permission to check if a user is able to link/unlink issues to an epic.