If you have an macro with the output type set to OutputType.INLINE and you specify a body type (BodyType.RICH_TEXT or BodyType.PLAIN_TEXT) then the editor will set your macro to render in BLOCK mode. 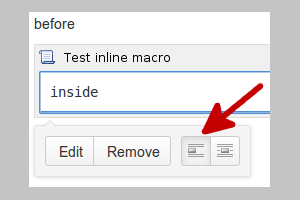 Shows that the test inline macro has been defaulted to BLOCK. It was expected that this macro should default to INLINE.

Further, if the inline macro has been manually set to INLINE the view format of this macro still appears to be block. Storage Format:

Note that the atlassian-macro-output-type has been set to INLINE (by selecting it from the popup menu). This is rendered on three separate lines because the because the surrounding <p> tags are broken around the body.