When upgrading Confluence to 6.14 or later, admins see the following message that English_United States.1252 is not UTF-8

This is a false warning and can be ignored, provided the client encoding is set correctly.

I've had several users on Community reach out to me regarding this confusion, for example:

Until September 2019, the Database Setup for Postgresql doc specified that:

Collation must also be set to utf8. Other collations, such as "C", are known to cause issues with Confluence.

This is clear to Linux users, but for Windows users, their options might look like the following:

During setup of the database in Windows, users are to select a locale, and are presented with the following selections: 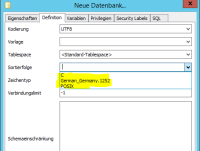 Confluence health check does not give the false warning when using .1252 collations

We should update the health check to accept the Windows equivalent of UTF-8.

UTF-8 encoding can be used with any locale.

In addition, I reviewed this blog post, Locale in Windows, and it appears that you should be able to use English_United States.1252.

Although I believe this is addressed with the following line:

Choose the locale that best matches your geographic location.

CONFSERVER-58052 post-upgrade health-check throws false warning: The database collation 'en_US.utf8' is not supported by Confluence. You need to use 'utf-8'.